CAD/JPY has resumed a broad uptrend and is forming a symmetrical triangle that would favour a re-test of the 2022 high, according to George Davis, Chief Technical Strategist at RBC Capital Markets.

Davis cites several factors in favour of the bullish play:

1. CAD/JPY has resumed a broader uptrend from the 90.00 area back in March. The subsequent advance peaked just above 107.00 in early June as the daily RSI moved into overbought extremes (see Chart).

2. The resulting price consolidation since early June has remained above the 55-day moving average and the Ichimoku Cloud, while the daily RSI has stayed above 40, all signs of underlying bullish sentiment.

3. As a symmetrical triangle pattern forms, pullbacks to support at 104.06 and an ascending channel base at 102.91 are expected to attract buying interest.

Davis says a close below the channel base at 102.91 would, however, derail the current uptrend. 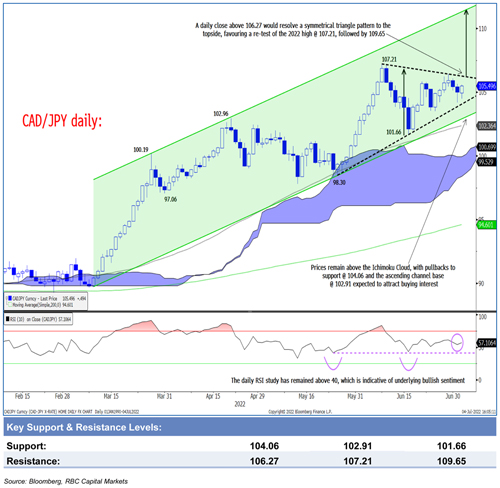