EURGBP close to completing a base

EURGBP has surged higher and recent price action looks like the right-hand shoulder of an inverse head-and-shoulders base, according to David Sneddon and his team at Credit Suisse in London.

Sneddon says a close above key resistance from the February high and 200-day moving average at 0.8471/79 would confirm the bullish pattern and see the core trend higher. Initial resistance would then be at 0.8595/0.8618, which is the December 2021 high and 38.2% Fibonacci retracement of the 2020 to 2022 fall. He would expect this level to temporarily cap the move upward, though in due course Sneddon thinks the measured base objective at 0.8715 would be reached. 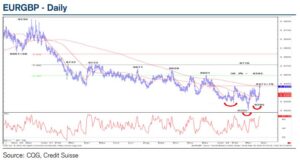