Is the big cycle turning?

Ron William, director of RW Advisory, looks at the evidence for a major market drop in the S&P 500.

+ The 50-day moving average, typically a floor for buying-the-dip trading, has been significantly breached.

+ The appearance of a market exhaustion signal

+ The development of a “Minksy Risk Pattern”, which is a volatility signature with a pattern of higher peaks and lower troughs that creates a bull trap and a signals a potential crash ahead.

+ The composite cycle is signalling greater mean-reversion risk into H2 2022-2023.

If the S&P 500 can break above 4805, however, William thinks there will be good reason to reassess the market, with a bias towards the upside. 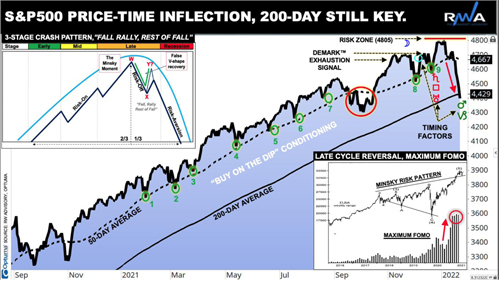