Arabica coffee contract has surged as much as 63% this year owing to the devastating droughts and frosts in Brazil, the world’s largest coffee producer. This has led the local government to reduce its crop projection for 2021 and warn of a “big impact” in next year’s harvest as well.

KC1 is reinforced by its position above the Ichimoku Cloud which has kept the market buoyed on intra-trend retracements. Momentum regimes are also supportive with core MACD posture bullish. Combined, these developments buttress the symmetrical triangle breakout, which projects a minimum target objective to 234.00.

Key resistances can be found at the 201.55 swing high and the 215.20 contract high. A close below 184 (the 50-day exponential moving average) would negate the objective.

• Crops on some 1.5 million square kilometres of land have been damaged — an area the size of Peru. The coffee losses are the most stunning: as much as 1.3 billion pounds of beans destroyed, enough to brew every single cup that Americans drink over a four-month period.

• Soil humidity was down to a mere 20% for most crops. Ideally, that number would be closer to 60%, says Ademar Pereira, the head of the local coffee growers’ association.

• The country is expected to harvest 40% less high-end arabica beans than last year — a loss that is equal to about two-thirds of annual U.S. consumption. 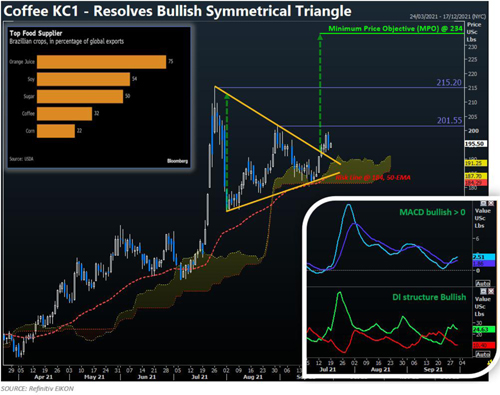 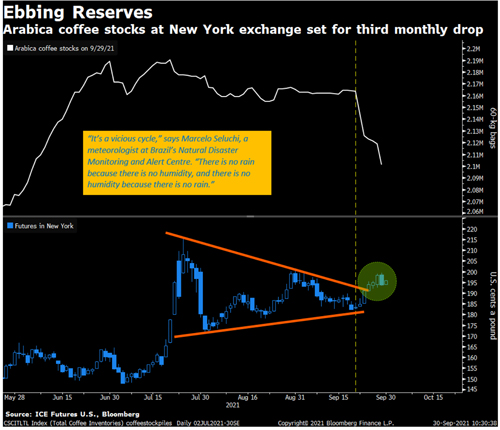