The Russell 2000 continues its steady push higher, having broken with ease above its downtrend from February, according to David Sneddon and his team at Credit Suisse in London.

Sneddon says the market, which is at record highs, remains above the top of the medium-term channel from 2009 and he maintains a bullish stance in the short- to medium-term (see Chart). Resistance is at 2366, which he thinks will temporarily cap the upwards move. Above this, in due course, should see resistance next at 2397/2400 and ultimately the 2445 target, which is the measured objective from the large 2018/2010 consolidation range.

Overall, Sneddon points out that rising bond yields are expected to stay supportive for Small Caps and he stays bullish for 2366 next and eventually 2445. 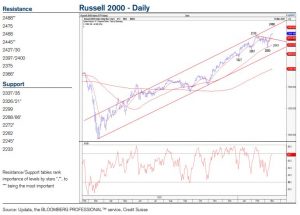