The FTSE is testing its short-term uptrend channel which if broken would usher in a sustained move lower, according to Andy Dodd, Head of Technical Research at Louis Capital Markets.

Dodd says nothing has changed much over the last few weeks and he remains biased towards the downside in the medium-term following the bearish Dark Cloud Cover candlestick on the weekly Chart. This candlestick appeared at 6,492, which adds to its importance because that level is both a key resistance and marks the 61.8% Fibonacci retracement of the Q1 2020 fall.

However, Dodd points out that the FTSE remains in a short-term uptrend channel. This channel is currently being tested and should it fail he would expect downward momentum to pick up and a sustained move lower. 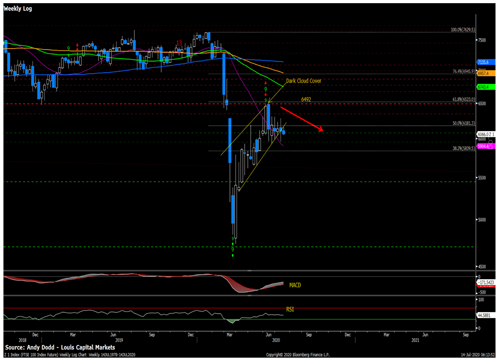