The S&P 500 may be close to beginning a consolidation phase, says David Sneddon and his team at Credit Suisse in London.

Sneddon says the S&P continues to show signs of stalling from just below key resistance from the bottom of the February “pandemic” gap at 3260, with a small bearish “outside day” established yesterday (10 June) (see Chart). He remains alert to signs that a consolidation phase may be close to starting and thinks a move below the payrolls price gap at 3164 would increase the risk of a correction and may initiate a move to the lower end of the gap at 3112. However, Sneddon stresses that only a move below this latter level would mark a potential top and a correction/consolidation phase, with support then seen at 3090.

Above, Sneddon sees resistance at 3223 initially, then 3233. He thinks a move above 3233 would reassert the rally with resistance seen next at 3247, then the lower end of the large February price gap at 3260. An overshoot to the upper end of the gap at 3328/38 is seen as a real possibility, but he continues to look for the broad 3260/3338 zone to try and cap for a consolidation/correction to emerge.

Overall, Sneddon thinks pressure is building for a correction lower. 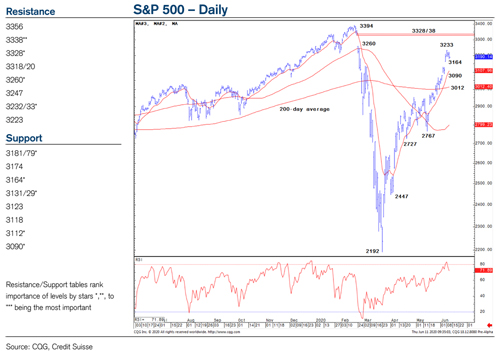