An analysis of volume for the S&P 500 suggests the index will likely return to its former uptrend, says Buff Dormeier, Chief Technical Analyst at Kingsview Partners.

However, Dormeier cautions that a huge amount of trading volume was exchanged between 2700 and 3050 and this is acting as drag. He therefore expects a trading range to develop with a floor of 2400, further supports at 2600 and 2720, and resistance above at 2900 and 3050.

In Dormeier’s view, the key to identifying if or when the market will rebound back to its long-term upward trend are the leading indicators; the same indicators that earlier diverged from price action as the market was bottoming out. If these indicators – primarily capital weighted volume and the advance-decline line – break above trend, he would then expect the market to follow suit.

In Chart 1, Dormeier points out that the advance-decline line (middle pane) has been pushing against resistance, and unable to break above its trendline (pink link), for nearly three weeks. He thinks this could be a sign the market is entering into a trading range. If the advance-decline line, however, breaks above its trendline, Dormeier says the S&P 500 should eventually follow. 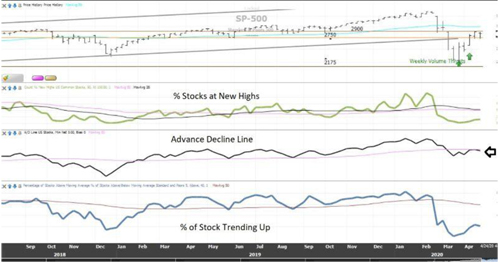 Dormeier also thinks capital inflows are an important signal and that one of the telltale signs of institutional buying is up-volume thrust days, i.e. where the market’s upside volume dwarfs that of its downside volume by a ratio of 9 to 1 or more. Looking at Chart 2, he says to observe the “Capital Inflows” in the middle pane. The circles show multiple clusters of Capital Weighted Volume Thrust days that foreshadowed the recent market rally. This is one piece of data that supported the idea that the market should eventually regain its former uptrend. 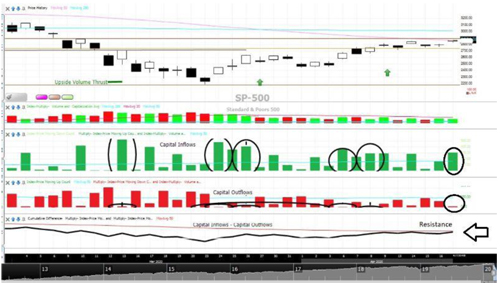 The lower pane of Chart 3 (“Inflows – Outflows”) is the capital weighted volume accumulated over time, which illustrates the capital moving in and out of the S&P 500 index. Dormeier says that, just like the advance-decline line, capital flows have been knocking on resistance’s door but unable to break through. If this indicator were to break above its red trendline, it would suggest the S&P should also eventually break above its own trend residing at 3025. 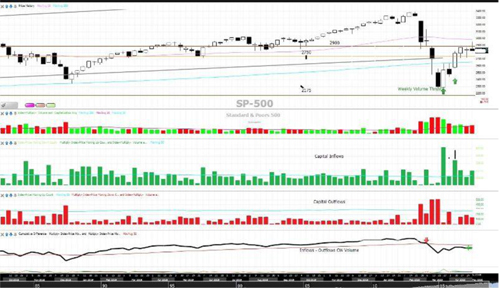 Whilst the S&P has rebounded over 700 points in three weeks and recovered over half its losses since the 19 February high of 3393, Dormeier stresses that the market has entered a triple area of resistance – the advance-decline Line, capital flows and price resistance. As such, he believes the easy money may have been made already and the next advance may prove more of a struggle.

From an investor psychology perspective, Dormeier thinks a new source of buyers will originate from investors who see this rapid rise in the market and do not want to miss out. He says that buyers who are motivated by fear are weak holders and are unlikely to have the stamina to ride out the bumps and bruises that generally occur. Meanwhile, as the S&P advances to higher levels reached prior to the COVID-19 pandemic, many holders will be tempted to sell. These holders regretted not selling when the market was formerly this “high” and these holders may view this advance as their second chance to get out. Other market participants will be persuaded that given the pandemic, stock prices are unworthy of their recent gains. They will question how the market could be at prices seen last October given the current effects of the pandemic. These participants are likely to sell into market strength.

As such, Dormeier expects the market to meet strong resistance until it advances back to its former uptrend.