A major divergence in oil markets suggests a similar set-up to late 2018 may have formed, according to James Dima, technical analyst at Marex Spectron.

Looking at a Chart of WTI (U20), Dima points to the appearance of a powerful divergence between price and the RSI (lower pane), i.e. yesterday’s price low (21 April) was unaccompanied by a new low in the RSI. In fact, today’s RSI is about twice the level it was on 18 March.

Dima says this is a similar technical setup to the one that occurred for oil markets in Q4 2018 (Chart 2): a prolonged down move in price, marked by an extremely low RSI level, which was followed by further capitulation but with a much higher RSI. For example, U19 WTI dropped from 72.00 to 45.00 from early October until the end of the year. On 28 December 2018, a powerful divergence occurred in M19 RBOB (and across the barrel) and this was essentially the low of the down move.

Dima says that any technical buying opportunity would certainly not come via momentum, but from signals such as price / RSI divergences. That said, he urges caution – a comparison with 2018 does not provide sufficient evidence to suggest today’s levels mark the absolute lows. At the least, however, he thinks the divergence is a powerful signal and should be a large red flag to shorts. 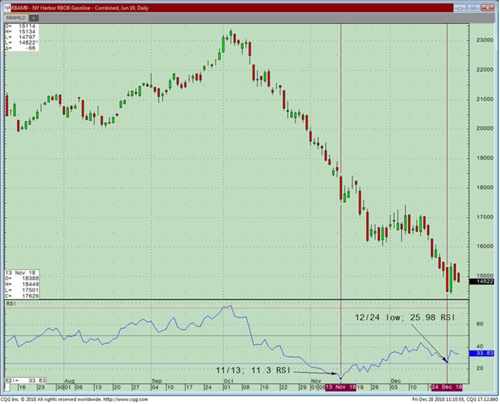