Bitcoin has moved back above both its trend channel resistance and 200-day moving average – a positive bullish development according to Tony Sycamore, Director of Australia-based TECHFX TRADERS.

Yet Sycamore is worried by the long tail of the candle that formed at the end of last week, which is usually a short-term sign of exhaustion (see Chart 1).

Sycamore remains bullish overall, however, in part because the longer-term view suggests the market is looking for a retest of the 19666 high from December 2017 (see Chart 2).

As such, provided Bitcoin can close convincingly above its 200-day moving average and trend channel resistance at $8.9/9.0k, Sycamore’s short- to medium-term target is $15.0/16.0k. 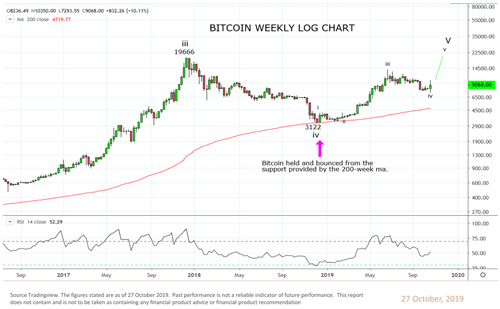