A rally in the Bloomberg US dollar Index (BBG DXY) has left it in a position to remove pivotal resistance and begin a sustained phase of strength, according to David Sneddon and James Gilbert at Credit Suisse in London.

Sneddon and Gilbert say the pivotal resistance level, at 1195/99, comes from the top of its sideways range and the 50% retracement of the 2017 to 2018 downtrend (see Chart). They think an eventual break above this level will confirm a large head-and-shoulders base, which would then see the core trend for the US dollar turn higher again. Resistance would then be found at 1216 (the 61.8% retracement of the 2017 to 2018 downtrend) and then 1232/44 (the April 2017 high and 78.6% retracement). They see little in the way of resistance between this latter level and the 2017 high at 1281.

Sneddon and Gilbert say support can be found at 1190 initially, with 1180 needing to hold to keep the immediate risk higher. 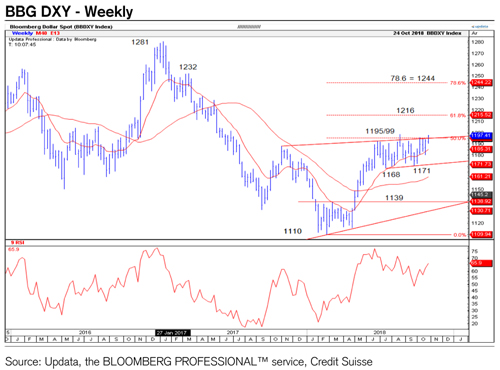