US stocks at oversold extreme

The percentage of US stocks in oversold territory is at a multi-year high and, together with a jump in the VIX, could be viewed as a bullish signal, says Ari Wald, Technical Analyst at Oppenheimer.

Wald notes that the percentage of Russell 3000 stocks below 30 on the 14-day RSI has surged to a multi-year high (38%). He has found that S&P 500 returns since 1995 following such extreme oversold readings are followed by an average 4.3% gain over the next month versus 0.7% for the all-period average (see Chart).

Wald also points to the VIX, which has jumped significantly, indicating heightened fear and possibly another contrarian signal. In terms of S&P levels, he see 2,675 as the key support level, which corresponds to the May low and 23% retracement of the gains since 2016. 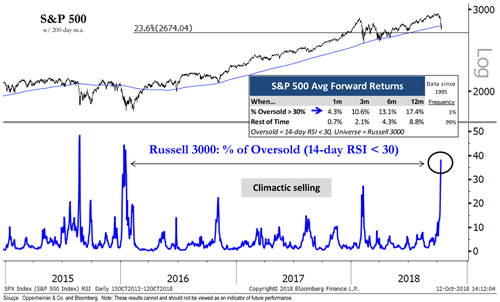