Providing the S&P 500 does not close below 2590 there is a good chance of a rally back towards 2770 in the week ahead, says Tony Sycamore, Director of Australia-based TECHFX TRADERS.

Sycamore suggests the S&P may be close to completing an ‘abc’ correction (see Chart 1), especially given 2590 – the level at which the index has rebounded – is the wave equality support region (i.e. the level at which Wave a equals Wave c).

However, Sycamore warns its crucial the S&P stays above the 2590 level, which is the medium-term trendline (see Chart 2). A break below 2590 would, he says, open up a retest of the February lows at around 2530 and potentially lower to 2200: “To say it’s a big week would be an understatement.” 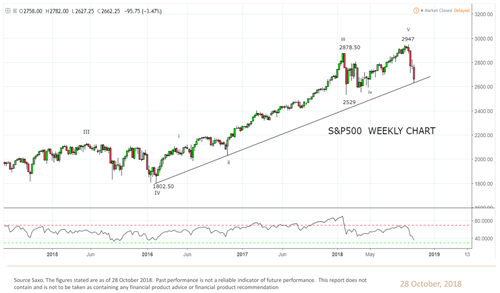