S&P: Watch for a reversal day

Conditions are developing for a resumption of the S&P 500’s uptrend, according to Ari Wald, Technical Analyst at Oppenheimer.

On Friday (23 March), the S&P 500 closed above its 200-day moving average (at 2,585) and Ari Wald now believes there are five good pieces of evidence to suggest the index is ready to resume its uptrend:

1. The weakness in the S&P since January has occurred above a rising 200-day moving average (i.e. within the context of an uptrend).
2. The correction has reached a duration (8 weeks) and magnitude (11% drawdown) that is consistent with the average length and depth of a correction.
3. Selling has become more selective: In the latest leg lower only 132 stocks made 52-week lows in the Russell 3000 compared to 357 stocks in February, giving a bullish divergence (see Chart).
4. The S&P is trading in an area of converging support around 2,580 (the 200-day moving average and February low), offering a ‘reasonable’ level to bounce off.
5. Certain indicators have become oversold and pessimistic, for example the 14-day RSI is at 30.

However, Wald stresses that trading action still needs to confirm his analysis. As such, he will be looking for a key reversal day, i.e. a day in which opening losses are reversed into the close. 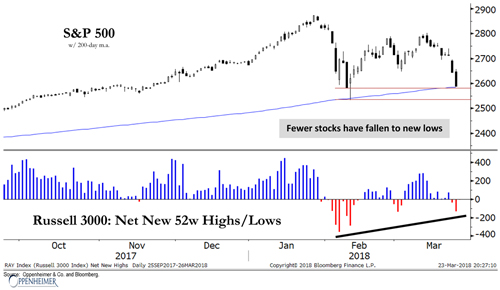